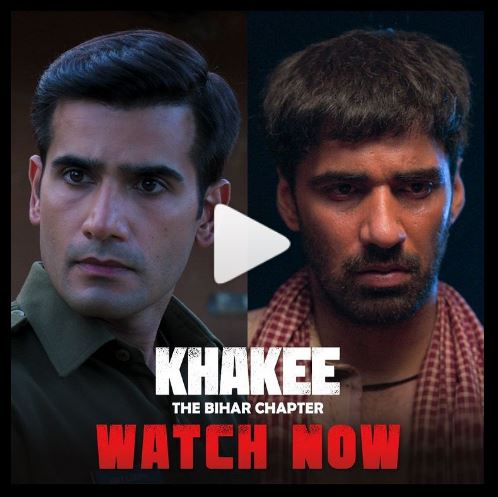 Khakee The Bihar Chapter Review Khakee – The Bihar Chapter is the sequel to hundreds of police-gangster stories that have often been shown through web series or films. But Neeraj Pandey’s khaki cannot be ignored just because of this.

New Delhi, Manoj Vashisht. A web series came on MX Player – Bhaukaal. Its story was based on the stories of Navneet Sikera, a domineering police officer of Uttar Pradesh. The character of Navneet Sikora was played by TV’s popular face Mohit Raina.

Now Netflix brings to you the adventures of Amit Lodha, an IPS officer of Bihar cadre, as recorded in his book Bihar Diaries. In this series, famous TV actor Karan Tacker is playing the role of Amit Lodha. Neeraj Pandey, director of films like Baby, Special 26 and the Special Ops series, is the writer-producer of Khakee. The series is directed by Bhav Dhulia.

The story of Khakee is the screen adaptation of the events written in this book. An exciting blueprint has been drawn of alliances and tussles between Bihar Police, state politics, caste equations and musclemen emanating from discrimination. The events are real, but some names and places have been changed.

The theme that Neeraj has chosen for Khakee is not new. Countless movies and web series have been made on ‘police vs gangster’ stories. The characters and events of most of the stories remain almost the same, if anything differentiates it, it is the style of telling and showing the story. Khaki does not give anything new, but does not disappoint either. On average, the series spans seven episodes with a duration of one hour.

Jaipur’s IPS officer Amit Lodha gets Bihar cadre. It is the beginning of the century and there is Jungle Raj in Bihar. Such is the influence of criminals that even in the capital Patna, incidents of kidnapping keep happening. Chandan Mahato, who came out of the gap between forward-backward, rich-poor, wants to earn a big name in the world of crime. Even if it means massacring 25 people in public.

Mahto has the support of the people of his caste and the hands of those in power on his back. However, when his increasing coldness becomes a threat to his supporters, then his bad days begin and IPS Amit Lodha gets involved in the mission to catch him. As promised, SP Lodha catches him before 15th August and after some dramatic developments, the court sentences Mahto to death for the murder.

Neeraj Pandey has adapted the chapters of Amit Lodha’s book into a tight screenplay. The story begins with the narration of Inspector Ranjan Kumar (Abhimanyu Singh). In the first scene, it is shown that the results of the elections in Bihar are about to come. Meanwhile, Ranjan Kumar has laid siege outside the house of notorious gangster Chandan Mahto and is taking instructions from his seniors on the phone.

How the plan to capture Chandan goes awry with the chances of winning or losing the election, this scene lays an interesting foundation for the seven episode episode of Khakee – The Bihar Chapter, which adds to the story going forward. The story of Khakee moves forward through the narration of Ranjan Kumar and remains at the center – IPS Amit Lodha.

The real adventure of Khakee begins from the fourth episode, when the mind games between Lodha and Mahto begin. At the beginning of the new century, mobile phones had become more of a status symbol, the way IPS officer Amit, who studied in IIT Delhi, took the help of mobile surveillance to catch the dangerous Chandan Mahato, is the most interesting part of the series. .

Today all this may seem like a simple matter, because mobile surveillance has now become a common process in criminal cases, but at that time people did not know much about this technique, at that time the use of parallel listening by an officer of Bihar Police Doing is thrilling. Neeraj has shown his skill in crafting these scenes.

Actually, his victory lies in the fact that the story which has been told dozens of times has been presented in such a way that you do not get bored. Along with the main story, the series also goes on commenting on the situation of police officers in between. However, Neeraj did not go into depth about this. The performances of the actors in Khakee, their portrayal and the plot hold. Like the story and screenplay, Khakee’s dialogues are also very simple and localistic.

On reaching Bihar, Amit Lodha’s advice to say ‘we’ instead of ‘I’ is its hallmark. Even the part of the villain of the series, Chandan Mahto, has got effective dialogues. Despite being a gangster drama, the use of profanity in the series is negligible. Usually such series are released in the A category, but Netflix has released Khakee in the U/A 13+ category.

The biggest shortcoming of the series is the lack of detail in both its main characters. Amit Lodha’s background has been shown through some scenes, but the level at which he is a super cop character, he seems inadequate. Karan has tried his best to bring life to this character, but the kind of anger that should be visible on his face to play it, seems to be missing. Perhaps the reason behind doing this is to try to keep the story close to reality.

Avinash Tiwari has really done a wonderful job in the character of Chandan Mahto. Neeraj has worked hard to mold and carve his character. Avinash, seen throughout the series with dirty teeth, disheveled hair and dirty clothes, has lived to the extent of hating Chandan Mahto’s cruelty.

Jatin Sarna gave equal support in the role of Chandan’s confidante Chyawanprash Sahu. Chyawanprash is one of the most important characters of this story, who talks strangely with his girlfriend in the middle of the night. Aishwarya Sushmita impresses as Chyawanprash’s wife Mita Devi. He has got a layered character, which he also took advantage of. Aishwarya has also appeared in Special Ops. Meeta’s character brings a tremendous twist in the last part of the series.

Nikita Dutta is fine in the role of Amit Lodha’s wife Tanu. However, such scenes rarely came in his part, in which he could show a different dimension of his performance. Ravi Kishan’s character is important to the story, but does not last long. Ashutosh Rana in the character of IPS who changes color depending on the direction of the wind, looks entertaining as well as deep. The presence of Vinay Pathak and Shraddha Das has been like a guest appearance. Bhav Dhulia’s direction is tight. Neeraj’s impression is clearly visible on him. The work has been taken out from the artists according to their ability and specialty. The supporting cast also leave an impact.